The idea of a interdisciplinary centre for energy economics at the Swiss Federal Institute of Technology was first proposed in 1995 at a meeting of representatives of research, business, and public administration. With the filling of the two part-time positions of full professor for economics and energy economics (Nationalökonomie und Energiewirtschaft) by Massimo Filippini and Eberhard Jochem in the summer of 1999, the Centre for Energy Policy and Economics was founded. Daniel Spreng, titular professor at the ETH, joined the centre as one of its three co-directors.

Early supporters of the idea of an energy economics centre at ETH were, among others, Dr. Eduard Kiener, director of the Swiss Federal Office of Energy, he was keen to have a place which would provide impartial expertise in energy politics, Prof. Jakob Nüesch, President of ETHZ, saw energy policy and economics as an ideal field for interdisciplinary applied science and both Prof. Meinrad Eberle, director of the Paul Scherrer Institute, and Dr. Heinz Baumberger, from the electric utility Nordostschweizerische Kraftwerke, were keen to see energy economics to find its due place in Swiss academia.

On August 1st, 1999, CEPE started with Sprengs research group, the two new part-time professors and a secretary. At the beginning, Filippinis appointment was a joint professorship at ETH and at the Università della Svizzera Italiana. Initially he devoted 40% of his time to CEPE. Jochem started with 20% at ETH, the remainder of his time he continued his job as the deputy director of the Fraunhofer Institute Systemtechnik und Innovationsforschung in . On August 1 1999, the center had a staff of 10 people, three years later, in summer 2002, 30 employees, 20 scientists, were working at CEPE. In 2004 CEPE had 29 people on its pay-role, corresponding to 19 full time equivalents (FTE), in particular 12 doctoral students. The salaries from ETH corresponded to 9 FTE. 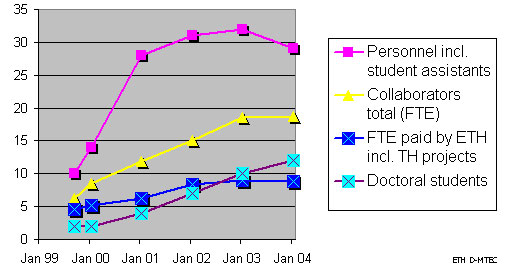 Initially, CEPE was conceived as a centre of the ETH domain. Echoing this idea, one senior scientist has received financing from and one doctoral position 60% financing from PSI. Never the less, institutionally the idea never took off properly. Collaboration with ETH and with the Paul Scherrer Insitute has become close on a project-to-project bases. Up to the summer semester of 2004, Proff. Jochem and Filippini have given lectures at ETH both at the Bachelor and Master level. From fall 2004 on, they will restrict their effort to the Master level.

In 2000, with CEPE being placed in the department of mechanical and process engineering and both Filippini and Jochem increasing their time at ETH, i.e. at CEPE, to 50%, CEPEs yearly institutional funding became that of one professor. Spreng had not only been active in preparing the setting-up of the centre, but also in raising funds to give it financially a head-start. More importantly, CEPE became successful in attracting considerable funds from other sources. Thus the total annual budget grew within three years to roughly 1.7 million CHF. Institutional support for teaching amounts to approximately 25% of that sum, institutional support for research (including targeted support for dissertations) is 35% and support from industry and public agencies for research make up the remaining 40%.

On October 1, 2004, ETHZ will inaugurate the new department Management, Technology and Economics. CEPE will become an integral part of this department and be well placed there.

Goals and tasks in research and teaching

Energy services contribute enormously to humanitys well-being. Producing them in an economically and technically efficient and environmentally friendly manner is a challenge for society as a whole. CEPE accepts this challenge as a guiding principle of its work. Further­more, CEPEs aims to enlarge the natural science and technically oriented disciplinary spectrum of the ETH domain by contributing to research and teaching in energy policy and economics. Its thematic focus on energy includes both energy supply and energy demand.

CEPE and its professors seek to point out developments in energy technology and economics against the backdrop of existing opportunities, risks, and obstacles. They intend to contribute to technological, entrepreneurial and policy innovations through analysis and recommenda­tions and to put these questions in an economic context. CEPE investigates energy economics and policy questions with the goal of making a contribution to academic research and impro­ving the decision-making basis of the government and of firms.

In the educational realm, the professors have offered ETH students in Zurich and Lausanne lectures and seminars, as well as colloquia for a broad audience from academia, industry and administration since the 2000 summer semester; they have also offered semester, undergradu­ate, and doctoral work in the areas of industrial economics, energy economics, energy effi­ciency, and energy policy. CEPE events thus far have been well received by students and specialists from business and the public administration.

Joint research projects are carried out with several specialized Swiss institutes and consultants and with research institutes in many parts of the world. CEPE is also a member of the European Network for Energy Economics Research (ENER), a research network of leading energy economics institutes with a node in most countries in Western and.

Since its beginning, CEPE is organised in three groups:

The groups do research projects they do by themselves, projects in which they collaborate with the other groups at CEPE and projects they do with researchers outside CEPE. In most projects collaboration expresses itself also in financial transactions. Quite a few papers are jointly written by members of more than one group.

The following figure illustrates the overlapping thematic areas and the themes the three groups work on. 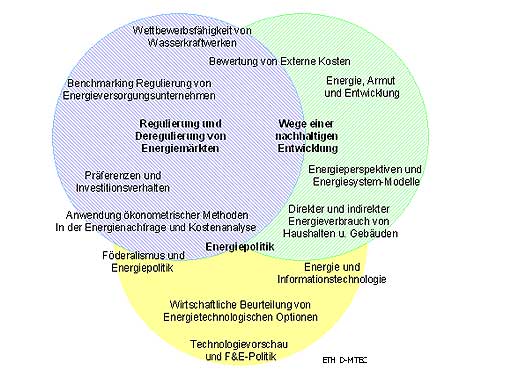 The research at CEPE will concentrate on the following topics in the next three to five years: